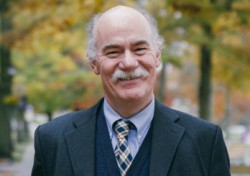 Before coming to Houghton in 2004, Professor Pearse taught church history and led the theology degree program at the London School of Theology for almost a decade. On a more occasional basis, he has also taught at Regent’s Park College, Oxford and the University of Newcastle in England, and at universities in Macedonia, Croatia, Romania, the Czech Republic, Russia and the U.S.

His work with student ministries and individual churches has taken in a wide variety of places in Croatia, Serbia, Bosnia, Macedonia, Hungary, Romania, Slovenia, Germany, Russia, the U.K. and U.S.. In between, he has made pipe valves in a German factory, taught Business Studies at a Jewish school, and once pumped gas at a gas station until he was sacked for being too honest.   In January, 2005, he addressed the Republican Party leadership, under the auspices of the Congressional Institute, in retreat at The Greenbrier, West Virginia.

The author of seven books, most notably Why the Rest Hates the West (InterVarsity, 2004), he speaks German, some Serbian/Croatian/Bosnian, some Welsh, and has been known to embarrass himself in Italian and French. In his spare time, he enjoys not watching television.